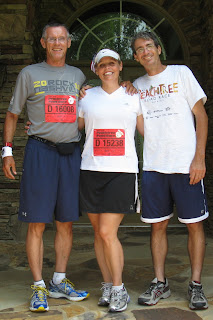 Brian and I just got back from visiting Dave and Joice in Georgia. While there, we toured Savannah, Hilton Head South Carolina, and the Atlanta area. We also completed the Peachtree Road Race. This race is a 10k ran on the fourth of July. This was the 42nd running of the race. It was a lottery entrance this year, and they capped participation to 60,000 runners. 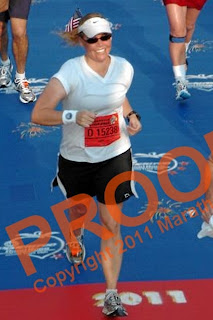 With that many runners all trying to run on one road, they stagger everyone's start times. I got into corral D (they place you according to your finish time in other races that you've completed). I was pretty lucky, because the later your corral letter, the later you start. The temps start out okay, but the humidity is always high. So the last corrals (they went up to "X") started at 9:30, whereas I started at 7:45 and was done less than an hour later. So the temps were only in the high 70s when I ran.

Brian was placed in the "sub-seed" corral. This means that you're fast, but you're not professional ("seeded"). This race was the US National Cross Country Championship race, and it has a sizable purse, so there were lots of very fast runners there. A familiar name that was there was Ryan Hall. He didn't finish so well - comparatively. The winner (from Kenya), won the race in 28:05.

We milled around after the race, finding all the free stuff (Dave was with us). We then walked quite a way to get onto a bus that would take us to the train back to our car. When we were on the bus, we passed the race course, and could see an entirely full road still packed with people (mostly walking, but a few were jogging). It was a crazy experience.
Posted by Shelley at 5:35 PM No comments:
Newer Posts Older Posts Home
Subscribe to: Posts (Atom)
"I think there is no better way to invite a human being to view their body differently than by inviting them to be an athlete, by revering one's body as an instrument rather than just an ornament." -Alanis Morissette