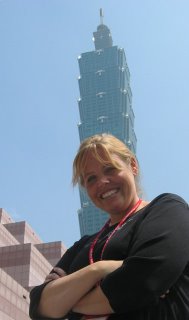 This is the world's tallest building. There is no way to capture how big it is unless you ride the world's fastest elevator to the top of it (1010 meters/minute ... so clever) and look out at how small the 50-story buildings are all around you. 1,667 feet tall, it is amazing in every way.
The tower was opened on New Year's Eve, 2004. This building could be cut off from the rest of the city and still run autonomously. The entire building is outfitted with fiber communication lines but has its own satellite communications system were the connection to ground communications cut off.
The first 6 floors of the building is a mall with movie theater and the best food court I have ever seen. Of course there is McDonalds, Subway and KFC. But there are several udon noodle bowl places, a really good Indian counter, a Mongolian grill, a sushi bar, and several other places that I couldn't name which region the food hailed from.
We saw a movie the last night that we were there. That itself is another experience. We walked up to a machine that is a lot like an atm. We picked which movie we wanted to see and at what time. Then we picked the seats we wanted to sit in and any concessions that we wanted (butter, soda, etc). Then we swiped our credit card and about twenty seconds later had little slips of paper that we turned in for popcorn and entrance to the theater.
I think the Taipei 101 was the best part of Taipei.
Posted by Shelley at 1:35 PM 1 comment: 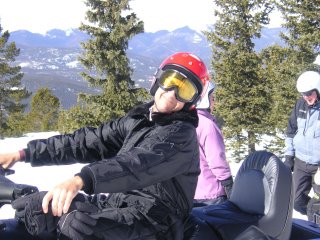 At the beginning of March, Brian, his parents and I traveled to Winter Park Colorado. 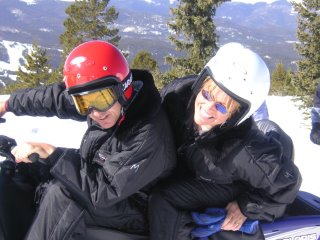 The purpose of the trip was for Brian and his dad to do their practice ski run. The ultimate goal is to ski some amazing place in Banff Canada for several days (I think). However, since it has been several years since Brian skiied and maybe more than a decade since his dad has, they thought they should practice. Barb and I went for fun and moral support should it be harder than they were expecting.

So it turns out that skiing was fine and they skiied one lovely warm day but the next day, we all decided to go snowmobiling. That was awesome! It was the first time I had been on a snowmobile so I was quite surprised when I found out that I got a cush seat and even hand warmers. This was the way to do "cold weather sports".

We rode the snowmobiles up to the Continental Divide and back down for about a total of a two hour ride. It was a blast. It was really sunny so we got lots of icy patches on the way down to slide around in.
Posted by Shelley at 1:17 PM No comments:
Newer Posts Older Posts Home
Subscribe to: Posts (Atom)
"I think there is no better way to invite a human being to view their body differently than by inviting them to be an athlete, by revering one's body as an instrument rather than just an ornament." -Alanis Morissette