Now that the big event is over, I can spill the beans about what Brian and I gave for xmas presents this year. We decided to make donations to charity for everyone on our gift giving list.

Initially, I had about five different charities that we were going to donate to. I thought it would be cool if each different house that we went to had unique charities per person. It turns out that only two of our five charities had the ability to make a donation in someone else's name. Heifer International and Big Brothers Big Sisters of Tucson made the cut. The funny part is that after we made the donation to BBBS, it turns out their gift cards weren't printable gift cards. So we ended up just writing in a card that a donation had been made.

Heifer International is not only a very cool charity but also had the coolest little cards that I could print out. They also let you print these inserts about the item that the donee was receiving (honeybees, flock of geese, trio of ducks, etc.) It was awesome. I urge you to check out their website if you don't already know about them.

Now that I know that some of the cards wouldn't come out anyway, I would make donations to my original list of charities. Here are some ideas to check out if you are in a giving mood...

First Book http://www.firstbook.org gives children from low-income families the opportunity to read and own their first new books.

http://www.habitat.org Everyone knows about Habitat for Humanity. They build local houses of course but did you know they build houses around the world for those that are homeless? The houses aren't free... the organization pays for the home but then the donee pays the loan with low interest rates. The interest paid on the loan then goes towards building other homes for other families.

These are just a few of the charities that I thought were interesting and worthwhile. The Motley Fool has a fundraising drive every year and they pick a couple of charities that are all well-run charities. Most of my picks are from this list. There are a lot of charities that are out there that are poorly run where only a small percentage of your donation actually makes it to the cause that you are trying to support.
Here's Motley Fool's 2004 Charity drive page:
http://www.fool.com/foolanthropy/2004/foolanthropy2004.htm?source=EDSP

Posted by Shelley at 5:52 PM No comments: 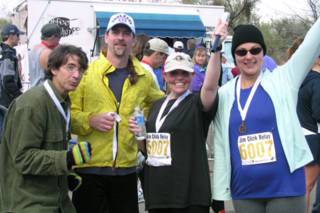 Well, we did it!
This is team "Relative Insanity" after we finished running the Tucson Marathon Relay. Of course, Brian and Steve ran so fast you have to see it to believe it.
But I have to say that Denise and I stole the show. Not being runners and never having actually entered in a competition before makes us pretty darn proud of what we did this Sunday.
As I write this my legs are questioning the intelligence of what I did. Nothing that can't be overcome with a little Ibuprofen and a few more days away from the gym...

Posted by Shelley at 7:52 PM 4 comments:
Newer Posts Older Posts Home
Subscribe to: Posts (Atom)
"I think there is no better way to invite a human being to view their body differently than by inviting them to be an athlete, by revering one's body as an instrument rather than just an ornament." -Alanis Morissette