It's been so long since I've posted, I've almost forgotten how. 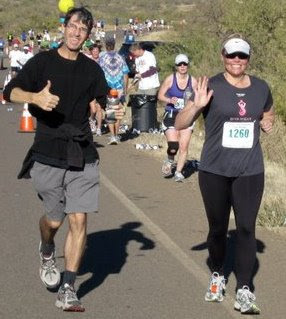 By popular demand (Barb), I've decided to start blogging again starting with a review of my 2nd running of the Tucson Marathon.

I decided to run this one again because I thought the downhill would help me achieve my goal. The goal the first time (2008) was to finish. The goal this time: 4 hours, 30 minutes. It was an ambitious goal, I'll admit it. My fastest marathon time before was 4 hours, 44 minutes. So taking off almost 15 minutes over 26 miles was going to be tough.

I failed. And by that I mean I really failed. I didn't make my goal. In fact, I didn't set a new personal record. I was really sad at the finish line. Scratch that, I was sad and frustrated at about mile 17 when I realized I wasn't going to make it. The finish line brought no surprises.

My training was rock solid. 4:30 breaks down to 10:17 minute miles. The plan was to run 10:00 the first half, and that gave me wiggle room to slow down to a 10:30 pace the second half. I had done plenty of long runs between 10:00 and 10:30 pace. As far as cardio goes, I felt like I was on a leisurely stroll. However, the downhill took a toll on my legs again, and the quads and hips started tightening up around mile 17 and just got worse from there. 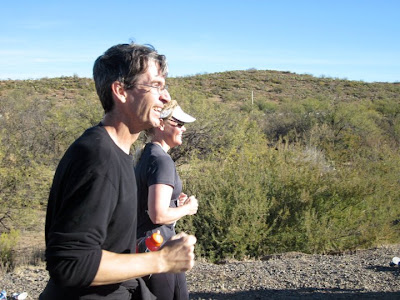 Lesson #1: I don't think a big downhill is really the wisest race to run for me. I'm still too heavy for all that eccentric contraction on my quads.

Lesson #2: There is a silver lining in everything. After about a week of feeling like the biggest loser for having failed at my goal, I woke up one morning to remember why I started running to begin with. It was because it was hard. It takes work. Even the most natural runner (Brian) has to work hard to get better and improve their own times.

And I am getting better. This was my second fastest marathon. That combined with the 80 degree temps that day is pretty darn impressive. Even a year ago, I don't think I could have finished in the heat.

I still had fun and am glad I did the race. I'm already thinking about the next one where I'll try again. (That's funny, because during the last 6 miles of this race, I was thinking that I was done with full marathons forever.)

The best part of this race was having several friends out there taking part. Chrissy, Carolyn and Justin from work were running on a relay team. So I got to ride the bus to the start line with Chrissy. She's so darn cheerful all the time, that was really fun. She's the one that took the pics of Brian and I in this post. Carolyn, Soraya and Ari all made a sign to hold up for me at the end. It really brightened my spirits, and for that last 100 yards, I didn't feel any of the pain.

I also had a friend that ran her first marathon. She had been curious and was already running quite a bit of miles back in October. So I gave her a little push and some training advice. She showed up, so nervous at the beginning I thought she was going to be sick. I wished her good luck at the beginning and didn't see her again until the finish line. She finished in 3:35. Boston-qualifying in her first race. That's inspiring.

Of course, I owe a ton of gratitude to Brian again. He probably ran at least a half marathon, with all the leap-frogging me with the car and running back to meet me. I think he saw somewhere around mile 15 that things weren't going to plan. He was all pep-talk, and all support. I thank him for his endless energy and inspiration.

Posted by Shelley at 5:29 PM No comments:
Newer Posts Older Posts Home
Subscribe to: Posts (Atom)
"I think there is no better way to invite a human being to view their body differently than by inviting them to be an athlete, by revering one's body as an instrument rather than just an ornament." -Alanis Morissette