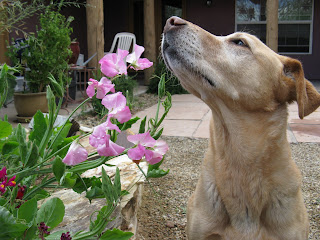 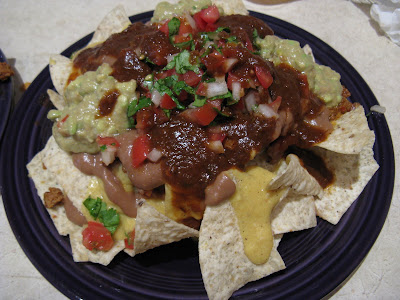 I've been curious about making vegan nachos for a while now, but any kind of nachos doesn't really seem like a nutritious meal, right? So, when the Wildcats were playing in the NCAA tournament two Fridays ago, I had my excuse. To watch a basketball game entitles most of the world to eat horrendously unhealthy things, so we might as well participate too.

We based our nachos on Losbetos "super nachos". So, we had to come up with substitutes for the carne asada and the cheese. The pico de gallo, beans, guacamole and chips are already vegan-friendly. We used the "cheezy sauce" recipe from Veganomicon for the cheese substitute. This is made of nutritional yeast and some other things that made us think that eating these were going to be pure torture. Our carne seca was textured vegetable protein cooked in chorizo seasoning. Again, we were thinking that after the game was over, we would have to have backup dinner plans because that just didn't sound good.

We were wrong. Really wrong. These were fantastic! I'm not kidding. I think they were much better than super nachos. (That's not hard to do, as Losbetos really isn't gourmet, is it?) I got a little carried away on my lemon juice in the guacamole and then a little carried away with my dark-red chipotle salsa, so the picture doesn't nearly convey how absolutely yummy these were. And, after reviewing the ingredients, these aren't actually that bad for you. Now, if only the game was as good as the food.

Posted by Shelley at 2:49 PM 1 comment:
Newer Posts Older Posts Home
Subscribe to: Posts (Atom)
"I think there is no better way to invite a human being to view their body differently than by inviting them to be an athlete, by revering one's body as an instrument rather than just an ornament." -Alanis Morissette