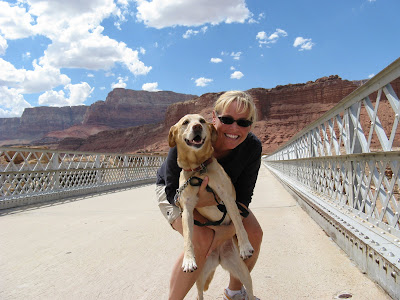 That's Sadie and I posing (oh so gracefully) in front of the Vermillion Cliffs in Northern Arizona. It's spectacular scenery, but also 105 degrees by 11am. We're standing on a very old bridge that crosses the Colorado River just a few miles down-river from Lee's Ferry. The Colorado here is pretty and lazy looking. It runs through a canyon that is impressively narrow and deep. That is, you would be impressed if you hadn't just come from seeing it meander through the Grand Canyon, which is unbelievable.

I think I have been to the Grand Canyon about 5 times in my life (although always from the much less dramatic south rim). It wasn't until this time that I really absorbed the immensity and isolation of it. It was truly awesome. I think that this is a trip that we'll repeat in a few years. 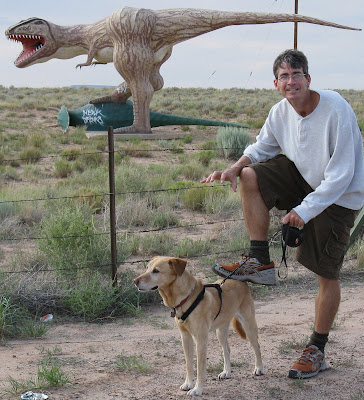 Dinosaurs are big in Holbrook. Every shop there has dinosaur in the name, and potentially some very large dinosaur models standing guard out front. Like these two in the middle of the desert. Yep, that lump of aqua-colored concrete that someone so artistically tagged, is a dinosaur. Sadie didn't really get the idea of playing dead, but you get the idea.

Holbrook is actually a nice little town. There's not much there, but it seems like a decent little community with a large share of manicured yards in front of well-kept homes. Our only intent was to stay in the concrete wigwams. You know them, they're shown in all the route 66 nostalgic images. Anyway, the wigwams were very plain but comfortable, and that's probably what you can say about Holbrook too.

Posted by Shelley at 8:00 PM No comments:
Newer Posts Older Posts Home
Subscribe to: Posts (Atom)
"I think there is no better way to invite a human being to view their body differently than by inviting them to be an athlete, by revering one's body as an instrument rather than just an ornament." -Alanis Morissette