Due to popular demand (Jen)... a review of slumber party part 2. 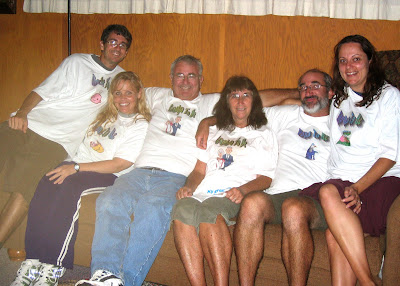 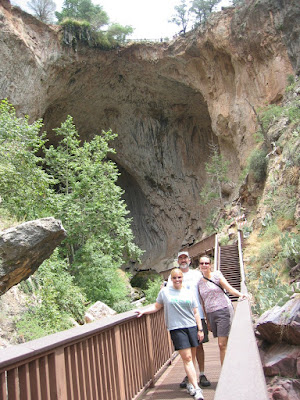 This episode of the slumber party was held at Denise's family cabin near Payson. Since this was the last week in July, of course it was a brilliant idea on the part of Steve and Denise to move the party out of the valley.
The weekend was marked by lots of relaxing, a hike under Tonto Natural Bridge, making custom pizzas, playing a very personalized version of Monopoly, a visit to the fish farm and of course, lots of button pushing. I, for one, had a fantastic time with all the events. Looking forward to part 3!

A fair warning to those of you who are less than interested in running in general.
For those of you still with me, I have to describe the weird thing that happened this morning while doing intervals.
So two weeks ago, I ran my fastest 400m interval ever - 2:01! This was faster than my previous PR by a whole second, and faster than my "average time" by about 10 seconds. I was hugely psyched and couldn't wait for the next week's session to see whether I could match it again. The weekend after that though, I promptly came down with a chest cold. (Weird I know - In the summer? Who gets colds in the summer? This was my first.) So the retry had to wait another week.
This morning I got a late start and my legs were quite sore from lifting weights yesterday. I resolved that I would get out there and do my best although I suspected lingering coughs and chest congestion were going to make it very difficult. So it was with great surprise when I pushed stop at the end of the first 400 and registered 1:58 on my watch. 3 seconds faster after being sick? This was getting weird.
So I told myself to slow it down a little or I wouldn't make it through the 3 more 400s that I had planned on doing.
The second 400 felt much slower, I was guessing 2:08 would be my finishing time. I pushed stop on the watch, looked down and saw 1:49.89. I came to a stop and my mouth dropped open. I quickly began calculating all the ways that I could be screwing up pushing start and then pushing stop. Brian wasn't there yet so I ran back to the car to get my cell phone to record these times. Brian showed up around that time and laughed as I tried to figure out how to write a memo on the phone. After explaining to him that I may never see these times again, he reminded me that there were two left and I trotted off to do them.
I was sure the last two couldn't break 2 minutes, I was just too tired. But I did! I ended up with 4 amazing times (for me) that I'm sure will carry me for at least a year.
1:58.48
1:49.89
1:52.37
1:56.21
Posted by Shelley at 7:32 AM 2 comments:
Newer Posts Older Posts Home
Subscribe to: Posts (Atom)
"I think there is no better way to invite a human being to view their body differently than by inviting them to be an athlete, by revering one's body as an instrument rather than just an ornament." -Alanis Morissette