Where do I start? I won't try to start by explaining why I signed up for the race in the first place. I still haven't figured out what makes me keep going back to the marathon, much less wanting to run more. I think it has a lot to do with testing my limits, and maybe trying to confuse people that insist on putting me in "a box". Whatever the reason, I ended up at McDowell Mountain Regional Park near Fountain Hills on the evening of October 15th, waiting to start what I was hoping would be a 75k (46.2 mile) race for me. It was a 12 hour night run, in which runners get to choose 1, 2, 3 or 4 loops (each loop being 15.4 miles), as long as they can finish the distance in less than 12 hours. I knew that I could finish 3 laps (as long as I stayed awake and moving forward). I also knew that I couldn't finish 4, so that was nice not to have the pressure to try.
I have to talk about my support crew a little here... Originally, I had asked Steve to give us a ride to and pick us up from the race, because I didn't think Brian and I would be in driving condition. In the two weeks leading up to the race, that turned into Barb & Dale picking us up from the shuttle at the airport, after they had setup the tent trailer at the park in their reserved camping spot. It seems that they spent their whole Saturday getting things all setup so that Steve, Denise and Ryder could camp out while we finished up our laps. Not that anyone got that much sleep, especially Steve. I thank them all. They are truly the best support team anyone can ask for. Here's a pic of everyone (except Barb, who's taking the picture) before the race started. 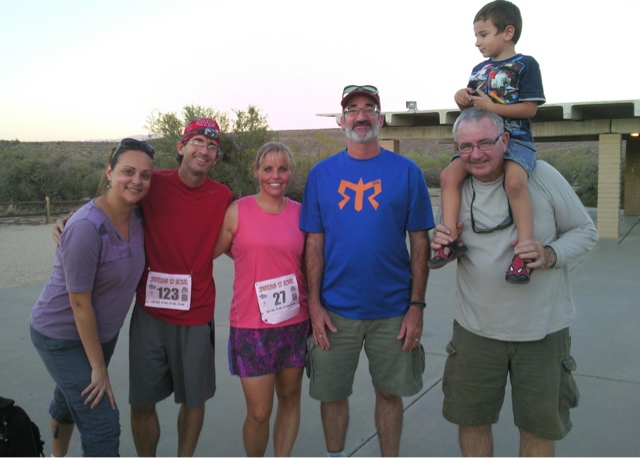