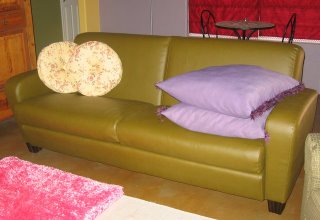 Isn't it awesome? The above includes our Todd Oldham vinyl couch as well as Sadie's new pink shag bed (so she wouldn't be jealous).
The below is our new recliner that is really cool except for the head grease pad which I had to put on to make Brian mad. 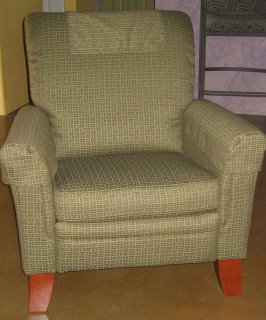 Posted by Shelley at 9:38 AM No comments: 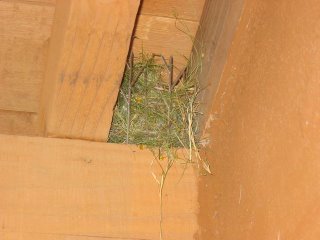 That's adorable, right? A dove nest on our neighbor's back porch.
Wrong, it's funny. Those clear plastic things are bird spikes, they're supposed to gouge the birds in case they try something like this.
Posted by Shelley at 9:33 AM No comments: 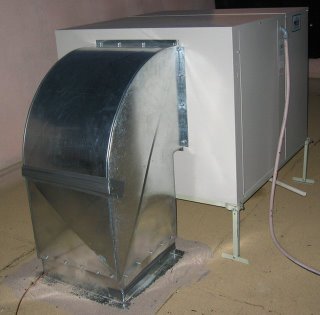 Brian and I finally installed an evap cooler. Now we're enjoying ice cold air on the cheap!
Posted by Shelley at 9:31 AM No comments: 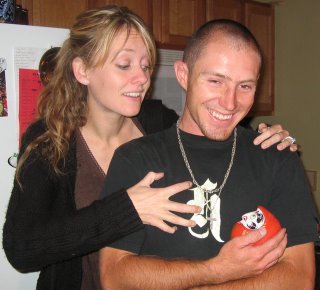 The thing in James' arms is a daruma. I just like the picture. You're not going to get an explanation.
So Brian is criticizing me for not giving an explanation, I'm just going to give a link here to his highly up-to-date and complete blog: http://brianzacher.blogspot.com
Posted by Shelley at 9:30 AM No comments: 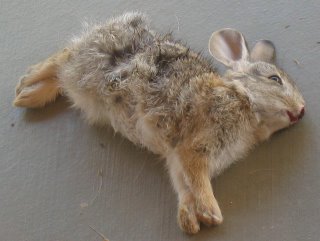 The morning after Easter, I went out for a little jog and when I came back, Sadie was eagerly trying to put this cute little bunny ON my feet. Sadie was so proud of herself she could hardly contain her excitement. She was wiggling around like she didn't have any bones in her body. I assume now that what I was doing to avoid getting the bunny put ON my feet looked much the same. After much cajoling, I convinced Sadie to put it on the patio and to come inside with me so that I could give her a treat for being such a good dog.
Finally I worked up the nerve to go outside and discard the poor bunny. I grabbed a broom and dustpan and slowly approached. I was dreading having to try and move what I thought would be an icky, squishy bunny into the dustpan. When I prodded it with the broom, the bunny was as hard as a rock. Rigor mortis was fully in effect. I discarded the bunny and then went inside to try and stop squealing.
That's when it hit me.
Sadie was a bunny-catching imposter! There is no way she could have just killed this bunny and for it to already have full rigor mortis. Since she was asleep in the bedroom with me up until 45 minutes prior, she could not be the murderer. Phew! My dog didn't kill a harmless bunny. But what she did was much worse. She was taking credit for the neighbor cat's handiwork.
I have to say I'm ashamed of her. I thought she had stronger integrity.
Sorry about the ickiness factor of this story. But aren't you glad I didn't make you think too much about the part where my dog goes and picks up an hours old bunny corpse?
Posted by Shelley at 9:07 AM No comments: 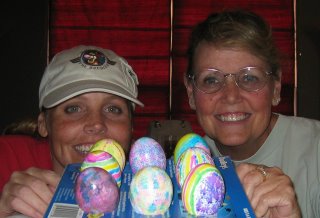 My mom came down to my house for easter. I love dyeing eggs but for the last few years, those little tabs that you dissolve in vinegar have been hard to come by. I just keep finding these fancy kits like the sponge kit that we used here. Not as stinky or messy and thus, not as much fun.
Posted by Shelley at 9:00 AM No comments: 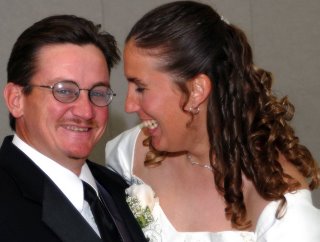 I just keep falling more and more behind on this blogging stuff.
Kevin got married back in late March. He was so nervous, excited and goofy.
They both looked like they had a lot of fun that day and I think that this guest did as well.
Happy marriage Kevin and Marti!
Posted by Shelley at 8:54 AM No comments:
Newer Posts Older Posts Home
Subscribe to: Posts (Atom)
"I think there is no better way to invite a human being to view their body differently than by inviting them to be an athlete, by revering one's body as an instrument rather than just an ornament." -Alanis Morissette