I remember back in September, when I saw a link to this article about how far Rocky ran in the training montage scene in Rocky II. I remember sending the article to Brian, because he loves everything Rocky. Of course, the link to ultra-marathons piqued my interest. The author had watched the training montage in Rocky II and noticed something a little interesting. Rocky REALLY gets around! To be exact, when he made a running route that connected all the scenes in order, Rocky ended up running 31 miles. When my December Runner's World came in early November, there was a blurb about a run that someone was organizing that followed Rocky's route - on December 7th. I called Brian from the Dallas airport and told him about it. Commemorating Rocky, on Brian's 39th birthday. It didn't get any better than that.

Of course, I was mostly joking. Brian has been running his daily 6 miles, but nothing longer since Old Pueblo in Tucson in early March. This was much longer, and with less than 1 month, there was not really time to ramp up his miles. Brian was not to be deterred. He was in. His parents were planning on coming out that weekend to celebrate his 40th, er, 39th birthday anyway, so we would make it a little road trip and they could see the sights in Philly while we ran around like crazy people.

The weather in the NE turned in the two weeks leading up to this race, so my biggest worry was freezing our arses off in the cold. Oh, and ice. We had learned that ice is a problem to run in. I think we got really lucky in the end with windchill at a balmy  32F (compared to our recent runs in NYC). The in-laws drove us to the start, where there were many runners standing around with grey sweats and a red sweatband getting ready to do this. Brian and I took a moment to pose in front of Rocky's steps - where the run starts. 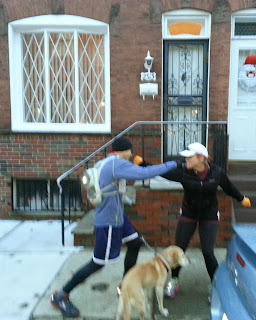 We did some practice fighting in front of the steps. Brian really wanted to vault over the railing just like Rocky, but because of my worries of him running 30 miles plus the fact that people actually live there, he had to settle for giving me a big right hook, just like Apollo Creed. Sadie was unimpressed.

The neighborhood we started in was awesome! This part of Philadelphia was a big old city like NY, but not so over-crowded. It also seemed like they kept a lot more older buildings, which are mostly limited to 4 stories or under. Lots of cute little restaurants, shops. Loved it.

We moved out of this neighborhood and started moving into a more industrial neighborhood. Still beautiful. And mostly deserted, as it was still early on a Saturday morning.

We planned to drop Sadie at around mile 12. I was worried about her too, because it has been longer than Brian since she's done a long run, and she is somewhere around 80 years old in dog years. Quite the old lady, but she was a fighter. I think she was psyched to be running with others, as she never once stopped pulling ahead on the leash. Now I know that she is faking when she drags behind me on 6 miles. We dropped her off at the hotel with B&D, where she had her breakfast waiting for her.

Around mile 15, I fell and was really demoralized then. It was cold, and I was tired. I was over 100 miles for the week, and it was showing only in my coordination and a little in my spirit. Right about then, we met up with 2 local girls from Philly who seemed interested in running with us. So the four of us joined up, and not a moment too soon. They helped my flagging spirits, distracted me from my scrapes and bruises and then we went through a REALLY BAD area, where I'm glad we had Brian 'bad ass' Zacher to keep all the questionable bystanders from acting on their comments that they threw our way...

We ended up running with them until 2 miles from the end. Which was really good. Because the course got a little confusing. And although Brian had done an awesome job so far at reading our course directions, I don't think we would have run the exact route had it not been for Madeline and Olivia.

I think I fell behind on fuel, because the last mile I was seriously flagging in energy. Every store that we passed that had a soda sign made me almost cry. But I knew we were so close and I didn't want B&D&Sadie to wait too long in the cold at the art museum. 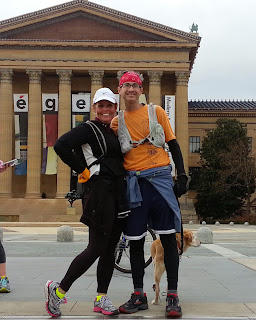 With just enough energy left to run up the steps at the art museum, we finished! We ran an extra bit dropping Sadie off at the hotel, so our total ended up at 31.4 miles. They had 'Gonna Fly Now' and 'Eye of the Tiger' playing on the steps. It was so much fun, and such a neat idea. We took no pictures along the way, but some people did: http://www.phillymag.com/news/2013/12/09/10-great-twitter-photos-inaugural-rocky-50k/ 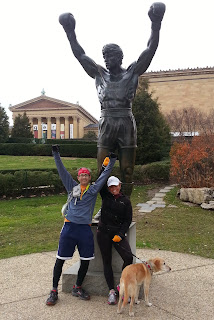 The last couple of miles of the run, the temperatures had been dropping and it was getting overcast. So Brian and I voted to go back to the hotel and clean up and maybe take a nap. In the meantime, B&D went out to see some sights before nightfall. We went out to a really good vegan pizza place that night, but most of the rest of the day Sadie, Brian and I spent sleeping.

What a way to spend a birthday!
Posted by Shelley at 3:06 PM No comments:
Newer Posts Older Posts Home
Subscribe to: Posts (Atom)
"I think there is no better way to invite a human being to view their body differently than by inviting them to be an athlete, by revering one's body as an instrument rather than just an ornament." -Alanis Morissette