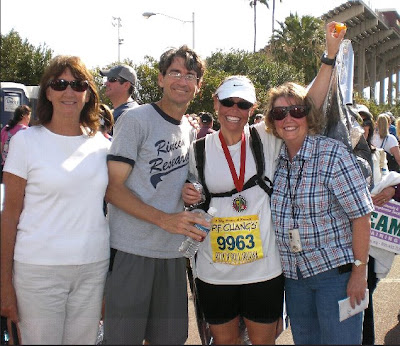 Or, marathon #2 for me. That there on the left is my mother-in-law Barbara, Brian, myself and my mom celebrating at the end. Yes, that is a foil blanket you see. Those are to keep you warm after the race because when you stop running, your body kind of poops out as far as warming you. And yes, it was way too warm for me to use it. But I have always wanted one and was very disappointed that they were not handing them out at the Tucson Marathon, so I took one. And baked myself in it.

Now I will admit that 5 weeks is not enough time between marathons to recover. My feet were telling me that at mile 15. In the month before, including the morning of, about 20 people had to tell me that I was going to hurt myself doing this. So I was being super-aware of all that my body was telling me during the race.

I didn't end up hurting myself; I just feel a little extra fragile right now in my hips, knees and feet. A special thank you to my dear husband for admitting afterward that he was worried, but never once uttering anything negative before.

I ended up finishing just 2 minutes after my time in Tucson. That's pretty amazing for that to work out that way after 26.2 miles.

As a complete but pleasant surprise, my mom showed up at the start line at Wesley Bolin Plaza. That shocked me, but in a happy way. My dad had brought her to cheer me through the race. They drove to a spot about every 5 miles and met me there with cheers and encouragement (drove like mad I'm sure - the traffic had to be horrendous). My dad would run with me for a half mile or so, yelling out positive prodding mixed with endearments and drill sergeant routines. After one of these sessions, after dad had veered off again, the guy running in front of me turned around and said "With encouragement like that, how can you not keep running?" I had to agree.

Brian met me at mile 20 to run the last 6 with me. As tired and sore as I was for this marathon, the last 6 were so much easier this time because I knew I could do it. Brian is very encouraging all the time, but he had his positive thinking revved up for me this time. I especially liked his comment right after we turned a corner, started running uphill and a strong, hot wind hit me head on, almost knocking my visor off. He said something like "Phew, I was worried because the wind looked strong. But now it's hardly blowing." It was a blatant lie, but it works for me every time. Thank you Brian.

The other thing complicating things at the end was temperature: 80 degrees. That's 20 degrees hotter than Tucson Marathon. Not to mention it was overcast at the Tucson Marathon and on this Sunday there wasn't a cloud in the sky. Phoenix can be so relentless that way. Since I'm kind of a big wimp in the heat, I was pretty proud of keeping it together and running the majority of the end.

Oh, and congratulations to my friends Denise and Laurie for finishing the half-marathon that day. What a trip to know the three of us were out there on the same day, pushing ourselves to the limits. Good job ladies!
Posted by Shelley at 7:50 PM 2 comments: 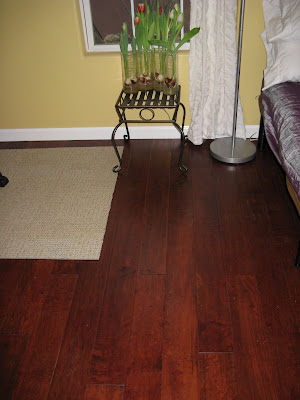 Oops. I haven't posted in a while! The floors are done in both rooms and they look great!

Now I'm trying to outfit the guest room/"my" room to be more useful for me. I plan to make it my sewing/celloing/reading/RockBanding/napping room for the 360 days a year that there aren't guests in it.
Posted by Shelley at 7:27 PM 1 comment: 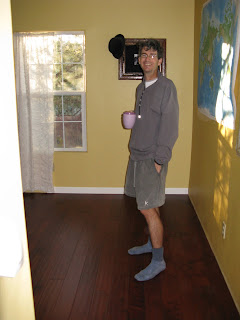 The floors are taking a little bit longer than we thought (we were thinking one day per room). However, we are becoming pretty darn good at installating so I expect that the next room will go a lot faster. As I type this, Brian is finishing up some caulking on the baseboard and then we can start moving furniture back in.
Posted by Shelley at 3:01 PM No comments:

Brian and I received a Roomba from dad and Carolee for Christmas. We were planning on putting wood floors down in the office and guest room, so after we moved out all the furniture, we set Roomba loose, closed the door and checked back in about 40 minutes later. The results were impressive. Check out the before and after pictures: 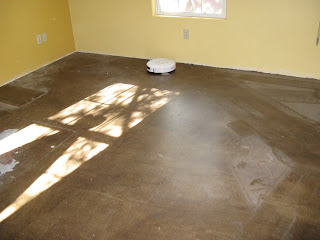 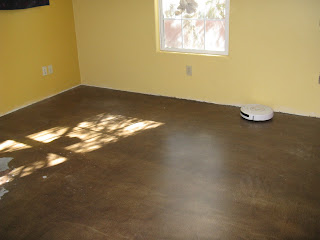 Posted by Shelley at 2:54 PM No comments:
Newer Posts Older Posts Home
Subscribe to: Posts (Atom)
"I think there is no better way to invite a human being to view their body differently than by inviting them to be an athlete, by revering one's body as an instrument rather than just an ornament." -Alanis Morissette