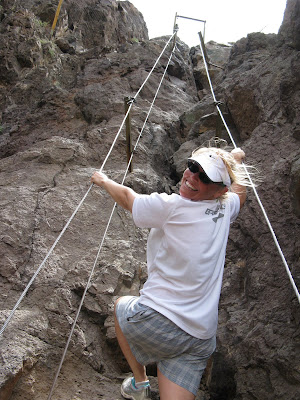 After driving past it pretty regularly for the past 16 years, I finally managed to hike Picacho Peak on Friday.

Brian had hiked it several times before, as it was often his boredom-reliever when he was commuting between Tucson and Phoenix every week. He assured me that although it was difficult, I could do it. What he didn't remember is that they advise gloves for the steel cables. Gloves would have been a VERY good idea.

There are two trails to get to the peak: the 2-mile Hunter trail and the 3-mile Sunset trail. Both the trails meet up about 1/2 mile below the peak for most of the steel cable climbing. We took the Sunset trail because it was a mile longer to make the ascent more gradual.

It was a beautiful 2 mile hike before it started to ascend up the side of Picacho Peak. At one point, I really didn't think I could make it; the footing had become very loose and I couldn't even stand up anymore, I was more climbing on all fours. But as soon as we realized we weren't on a human trail anymore and corrected our wrong turn, things became much more manageable. On the way back down, we saw our mistake - the sign telling us to make a turn had been broken and was lying on the ground. We propped it up and laughed at the animal trail that we had followed.

About a mile down, we ran into Kathy from Casa Grande. Kathy was a bit panicked because she was pretty sure she was lost. We asked her some questions and it became pretty clear that she was supposed to be on the Hunter trail. That meant she either had to climb a fairly steep 1/2 mile back up the mountain, or we offered that she come with us and we would drive her around to her car (and family) waiting at the bottom of the Hunter trail. We were very glad she accepted to walk with us, as she was completely out of water and not really doing that well. We shared the last of our water and started walking. I think that Kathy was suffering from heat exhaustion and dehydration, but we really didn't have that far to go. Brian and I probably had just enough water if we were able to walk our normal pace back to the car. We definitely didn't have enough water or sunscreen to walk Kathy's pace. We were both parched and sunburnt by the time we got back to the car. The funny part is all three of us are Arizona natives; we're not really the people that are supposed to make silly mistakes like that. But it all ended well and when I drove her back to her car, her family looked relieved to see her. 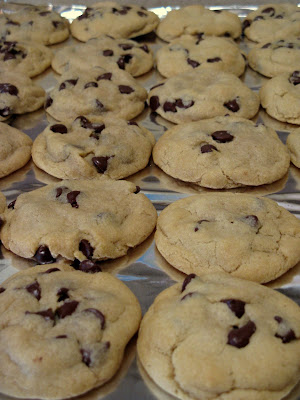 And I'm not exaggerating.

Of course, I can't take all the credit. I am using a recipe from Isa Chandra Moskowitz' Vegan with a Vengeance.

I L-O-V-E a good chocolate chip cookie. I L-O-V-E good chocolate chip cookie dough too. It's almost a toss-up. Which is probably why when I make cookies, I never get the same amount of cookies that the recipe calls for. I end up chomping my way through quite a bit of the dough. The fact that these cookies are vegan and that there is absolutely no way to contract salmonella by eating the dough raw is just a huge bonus.

Excuse me while I go eat another one before they cool.

Posted by Shelley at 2:41 PM No comments:
Newer Posts Older Posts Home
Subscribe to: Posts (Atom)
"I think there is no better way to invite a human being to view their body differently than by inviting them to be an athlete, by revering one's body as an instrument rather than just an ornament." -Alanis Morissette